The reason we chose the Baja Winters caravan over all the others was because, once they led us into the very southern portion of southern Baja, they cut us loose giving us 14 days of ‘on your own’ time . This was the perfect compromise for Mitch and me – help us get acclimated to a different system and then let us make our own discoveries and mistakes.

Because the drive from Santispac to Los Barriles (our freedom time jumping off point) would have been too long, we stopped overnight at Ciudad Constitucion. Situated on a flat stretch of the Transpeninsular Highway surrounded by lots of agriculture, the town appeared tidy and organized. The most memorable things from Ciudad Constitucion were it’s main street with its strange traffic pattern (there was a regular two lane road in the middle and then an extra lane on either side. You weren’t supposed to make left turns from the road in the middle. To make a left turn, you went into the right lane and then, at the next four way stop sign, you would turn left across all lanes of traffic – a little scary. I guess it was kind of like New Jersey’s jug handles without the handles.), Mitch finding his Baja hat, and my humbling experience at the big supermercado (super market).

After looking all over the store for fresh guacamole I finally went up to the customer service desk and asked, “Tiene guacamole?” (Do you have guacamole?”) As I’d mentioned in an earlier post, I used to have a decent grasp, both speaking and understanding, of the Spanish language, most of which I’ve forgotten. But I still thought that my pronunciation and accent of the vocabulary I remembered was tolerable. However, after my question, the young guy looked at me like I had two heads. So I tried to explain, thinking that, even though every restaurant we’d been in sold it, maybe guacamole was not a thing grocery stores here carry pre-made. “Con aguacates?” I added. (With avocados?)

“Oh, si, aguacates,” he smiled, led me to the huge bin of avocados in the produce section, and began choosing avocados for me.

“No, gracias,” I said. “Guacamole.” Still no recognition on his face. Maybe they call it something else here in Ciudad Constitucion. So I started listing ingredients and making hand gestures. “Con aguacates picados (chopped avocados) y ajo (garlic) y cebolla (onion).” All the time making the motions of chopping, mixing, and scooping a chip through dip.

Finally his face opened up. “Ahhh,” he said. “Guacamole?”

The next day, due to road construction, we had the worst day of driving yet. When they are repaving the roads here, they don’t shut down one lane and then the other, they close off the entire road and reroute all the traffic (18-wheelers, double tankers, 44 foot RVs) onto horrible, steep, sandy, washboard and boulder riddled unpaved side roads. We had to put our truck into 4WD to get up one hill. The other RVs had to go one at a time, letting the driver in front get up the hill so they could get enough speed to make it all the way up. 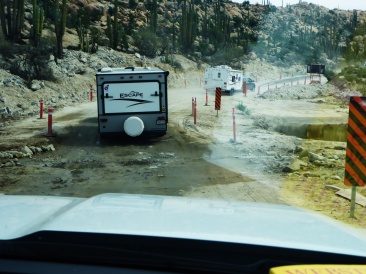 Our auxilliary brake cable snapped. We’re pretty sure this section of road did it!

But finally, we made it through the construction, through the city of La Paz, over a few more ruggedly beautiful mountains and down across a few washes to the windsurfing, four-wheeling town of Los Barriles on the Sea of Cortez where our 14 days of freedom started. No more group pot lucks, no more 8:00 am line-ups, no more scheduled bathroom breaks – a vacation in our vacation. Much more to follow…

(Spoiler alert – we are no longer in Baja. For awhile there it seemed like either we had internet with no electricity to turn on the computer, or vice versa, or we were too busy exploring to sit down and get a post out! So we’ve got a little catching up to do!)

It’s been great! Can’t wait to make it up to explore your area. One of these days…

[…] Maranatha RV Park in La Paz was our meet-up location for the caravan after our 15 days of freedom. It was fun to catch up with the others. A few of them had spent time in Cabo San Lucas, one couple […]