Last year we had a 25 foot, triple-slide, Sunseeker Class-C motorhome – roomy, plenty of storage, an actual door to the bedroom so that Mitch didn’t wake up on my early schedule and I could go to sleep while he was doing whatever he does after 9:30 pm. We sold it and bought a 19 foot truck camper with no slides, no privacy, and virtually no storage. And we love it!!!

Why do we love it? Because of places like the campsite that we stayed at for three nights after we left Los Barriles. It actually wasn’t a ‘campsite’ and that was the beauty of it. It was a beach, with no facilities and no crowds – just a couple of other campers, a few tenters, and a handful of day-use surfers.

When you start shopping for your first RV, you are drawn into the photos on the brochures – the happy family camping in a beautiful, lakefront site steps from the water, forest-covered mountains in the background, sparks from the campfire drifting lazily up into a starry sky, not another soul around. The reality is that, once you get that 30 foot travel trailer, the only place you can take it is a campground where you pay an arm and a leg for that waterfront site and you are packed in so tightly with your fellow campers that you know what they are watching on TV, what they are cooking for dinner, and the exact moment they light their cigarette. And that’s if you’re lucky enough to get a site. The state and county parks in popular locations are booked a year in advance.

With the truck camper, since we have it on a 4WD truck with high clearance, we can get to some pretty cool places. Baja was our first trip with it. But up until this point, we’d still been in regular campgrounds. This beach was our first taste of what we’ll be able to do. We’re pretty excited about the possibilities! 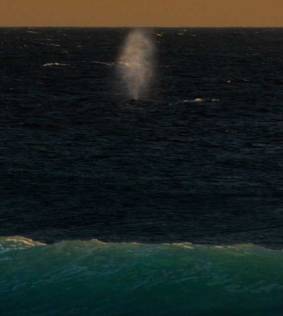 whale spouting off the beach 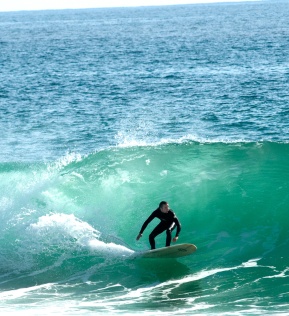 This wasn’t Mitch but he looked like he was having a great time!

The beach is known as “La Pastora” and it is a few miles north of the town of Todos Santos (on a terrible road, of course!). I’d read a lot about Todos Santos and had been pretty excited to check it out. It was supposed to be an funky, little artist’s/surfer town. The town itself is set slightly off the coast. But the beaches to the north and south are known for great surf.

We didn’t spend a lot of time in the town so this review is probably not completely fair. But I was a little, no – a lot, disappointed, in Todos Santos. It has become a day trip destination from Cabo San Lucas. So that means trinket shops filled with traditional Mexican crafts adorned with NFL team names, harried servers who’ve seen it all before, and prices that rival US beach towns.

Todos Santos is also home to the Hotel California. Urban legend has it that it is THE Hotel California of Eagles fame. The Canadian couple who bought it in 2001 and restored it list the many coincidences between their hotel and the song, but admit that it is impossible to know for sure because the Eagles ain’t talkin’. However the owners smartly took full advantage of the myth and included a large, bustling souvenir shop in their restoration.

The “coincidence” on their website that sold me on the myth was that the Mexican slang term for marijuana joints is ‘colitas’. I had always thought the verse said, “warm smell of cleat dust rising up from the air.” My entire life I’d wondered, what the heck is cleat dust??

Another interesting tidbit about the hotel is that it was originally built by a Chinese immigrant in 1950. Wanting the locals to believe he was Mexican, he changed his name to Don Antonio Tabasco (what a great choice!) But, sadly, the locals still only called him El Chino.

Most of the beaches to the south of Todos Santos have big resorts and gated communities. Playa Los Cerritos is one of the more famous surf breaks and, luckily, it still has a couple of public access areas. But, from what we’ve heard, you used to be able to camp right on the beach there. Now it has a beautiful, swanky hotel perched on a cliff overlooking it, beach clubs, and condos, condos, condos. No more beach camping.

OK – enough of the depressing, “you-should-have-seen-this-place-10-years-ago” stuff. We came to the west coast of Baja because Mitch wanted to surf. At Los Cerritos he got a great ride that almost killed him. And at La Pastora, he finally got out the last day we were there. I know he didn’t get as much surfing in as he’d hoped. But the waves were a little too big and powerful for what he’d wanted on his paddleboard. We’ll just have to skip work and return in the summer when the swells are friendlier. Bummer!

One reply on “Why We Bought a Truck Camper”

[…] I decided that since we’d lived-it-up at the Hotel California in Baja, we needed to stand on the corner in Winslow, Arizona. It was such a fine site to see […]