I don’t know if you noticed, but this year July lasted an entire decade. Or at least that’s how it felt. Finally, mid-September, we had our first day off. Time to get outside and have some fun instead of watching other people play!

Last spring we bought a small daysailor – a 16.5 foot Catalina Capri – because Mitch wanted a comfortable boat for teaching sailing lessons. But we haven’t found a satisfactory was to keep it at Coastal Kayak – it’s too nice to leave in the water and too heavy to keep on the beach. We used it a few times right after we brought it home but didn’t get it out last fall or this past spring. So “Joi” has been sitting, idle and lonely, in our yard for over a year. It was time to dip her in the water again!

I wanted to take her down to South Point to sail behind Assateague. But Mitch thought it’d be better, for the first time out in over a year, to stay close in case we were missing an important part. Little Assawoman Bay is the closest body of water to us – literally our backyard. But since our business is located on it, I’d been looking at those waters everyday, all day, for the last 4 months. I needed some new scenery. We agreed on launching at the new public boat ramp on 64th Street in Ocean City and sailing on Assawoman Bay.

After hooking up, unhooking, re-hooking, unhooking, we finally got the right combination of vehicle clearance and hitch/receiver size and, with a prayer of thanks to the trailer light gods, we were off. About 20 minutes later we pulled into the 64th Street ramp. Now it was time to see if we could remember how to rig the darn thing.

Rigging a sailboat can appear overwhelming. There are so many ropes and wires and lines and hooks and thingy-ma-jigs (that is an actual sailing term – trust me). But, as with many things in life, once you take the first step, most of the pieces have a logical order. And eventually, with a little patience, lots of sweat, and abundant swearing, you have something that looks sea-worthy. 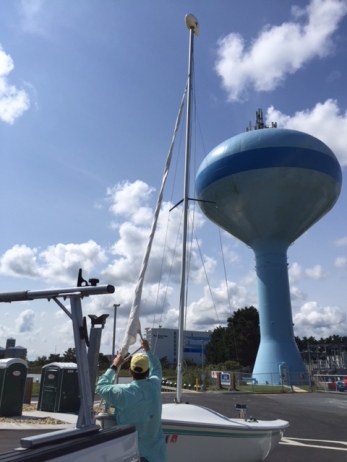 This was the first time I’d seen the new facility at 64th Street and I have to say that I was impressed. It has two wide ramps, long parking spots for probably 20 trailers, and a port-o-potty. Parking is $2/hr and the machine takes dollars, change, and credit cards. I’d guess that it is a mob scene in the summer but the day we went out (on a Monday), there weren’t any other trailers in the lot.

Once you launch, a canal running east-west, approximately 300 yards long by about 100 feet wide, leads to the open bay. We nosed into the bank to get the sail up, then pushed off a couple of times with the paddle, and finally we were off. With the light northeast breeze, we got out of the canal without even having to tack.

You are looking directly at the Route 90 bridge when you come out of the canal. Originally we’d thought we’d sail under the bridge and beach at Mackey’s for lunch. But the closer we got to the bridge, the dicier it looked – a lot more pilings and lower than we’d pictured and the channel seemed pretty darn narrow. Also, we’d planned for an east wind but it had a lot of north in it – meaning that coming back from Mackey’s would be very challenging.

But we don’t do day trips without having a lunch destination. We decided to try BJ’s instead, which is about ten blocks north of the ramp. Plenty of times we’d watched ducks and osprey from the waterfront tables at BJs, and we knew they have an annual canoe race, but we’d never seen a boat docked there. Was there a reason for that?

We sailed back and forth a couple of times about 500 yards from the restaurant trying to decide if we could make it. BJs has a marshy island directly in front of it. We knew, obviously, that there was water all the way around the island, but was it deep enough? While we were debating, we watched as a couple of waverunners carefully made their way up the cut to the dock. Good news! If they could make it, we could make it! (Joi has a kick-up centerboard and rudder so she only draws about 6 inches.)

Mitch gets all the kudos for getting us to the dock. I used the paddle to check the depth, but that was it. When we sat down at the table, our server said, “Were you the ones that came in on a sailboat? I’ve never seen that before!” 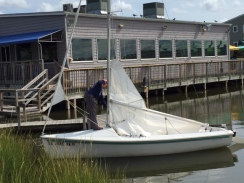 Dropping the sail once we were docked.

Sailing away from BJs was a lot easier than sailing to it!

Small, uninhabited islands dot the northern end of Assawoman Bay. I’ve always wanted to explore them. So after lunch, as the wind was still from the northeast, we hoisted the sail before releasing the dock lines and easily sailed away from BJs. Mitch pointed Joi upwind, pulled in the sheet line, and I reclined along the seat, ready to enjoy the sun and the breeze, my eyelids becoming heavier and heavier.

“Why don’t you sail her for awhile,” Mitch said.

Here’s the thing about me and sailing. I just don’t trust myself. And if I’m not comfortable doing something, Mitch guilts me into doing it. I know, I know…it’s probably good for me. But it is annoying. I know all the basics of sailing – I give people sailing advice all the time. But I don’t practice myself. So…here was my opportunity. Thanks, honey.

We switched places and then Mitch sat back, settled in, and went to sleep.

How to explain the sensation of sailing? The sheet line controls the sail and I like to hold it in my hand (instead of cleating it) so that I can feel the pressure of the wind in the sail. Through the tiller bar you can feel the pressure of the water. About 10-15 degrees off the wind is the sweet spot. A gust comes along and the boat rolls on its side and you grip the sheet line and the tiller bar and you feel the wind and you’re flying. You can’t help but smile. And maybe giggle.

And then, if you’re me, the gust picks up a little more, the boat rolls further on its side, you become a scared chicken and immediately release the sheet line, turn into the wind, and slow to a crawl. Wheee!! Gasp. Wheee!! Gasp…in this manner we slowly sailed up the bay. We made it as far north as the islands west of Northside Park (about 125th Str.) before turning back.

It took us about 20 minutes to sail back to 64th Street and about 30 minutes to get through the 300 yard canal back to the ramp. It was a very light north east wind by then and the tide was going out.

Mitch tacked about a million times but we were only moving inches. So our beautiful day on Assawoman Bay ended in the “Paddle of Shame”. But we made it back before our parking meter ran out and we got enough of a workout to earn our beer. All was good.

2 replies on “Sailing Away into Assawoman Bay”

I love this. I have always wanted to learn to sail (and yes, since I live in a sailing capital, I should learn…). I would have the same thrill vs confidence level as you, Jenifer. I enjoyed picturing the bays, where I loved to kayak so much. BJs, though, has sucky food, don’t you think?

Thanks Anne! The next time you’re down you’ll have to go out with Mitch! Get a taste of it to see if you’d like to learn more. One more water activity is always a good thing, right?! Most people who’ve had experience on the water and with wind (as most kayakers have) do pretty well with it. It’s a weird thing though, some people can just never tell where the wind is coming from. Seems impossible.
Mitch’s parents always loved going to BJs so we used to meet them there often. But we hadn’t been there in a while. I’ve had good and OK meals there. Some items seem over-priced but it is a really nice view. And they have a live “osprey cam” on their osprey nest which I think is kind of cool!