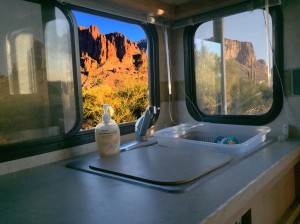 “If you post another photo like that, I’ll never talk to you again.” (That is the G-rated version of our Delaware friend’s comment.) Sometimes, people suffering through a miserable east coast winter don’t want to know what we see out our RV kitchen window. But the incredible view from our campsite at Lost Dutchman State Park begged to be shared.

Lost Dutchman sits at the base of the Superstition Mountains on the edge of Apache Junction. The name of the park comes from a legend about an ill-fated gold mine the location of which has been lost since the 1890s. Those that mined it were killed by the Apaches or other greedy miners and those who searched for it met with death or foul play. Sounds intriguing, right?!

Mitch made that time lapse directly from our campsite. How cool is that?

The 134 campsites in the park fit on a series of maze-like loops. 68 of them have water and electric while the rest are dry. The water-electric sites looked a little tight but our dry site had plenty of space. Over the weekend the campground was full and not all that peaceful (outdoor Karaoke, barking dogs, crying babies, music, drones, generators, etc.) but the view was unbeatable. Unfortunately we didn’t hear any coyotes but Mitch watched one trot through our campsite and sniff our tire. 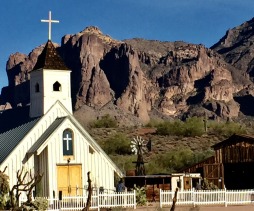 Hiking is the main attraction at this park but we only had time for one – to Flat Iron Peak via Siphon Draw. It is a two-mile (one-way) well marked and well used trail to Siphon Draw. The draw itself was beautiful – a small pool at the base of an orange-faced cliff which produces a waterfall when it rains. I hate to admit though, I barely paid any attention to the scenic spot as the trail to Flat Iron was my end-goal. 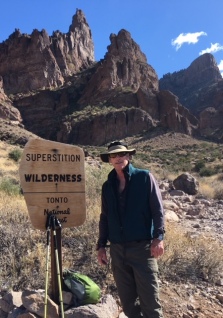 The start of the trail. 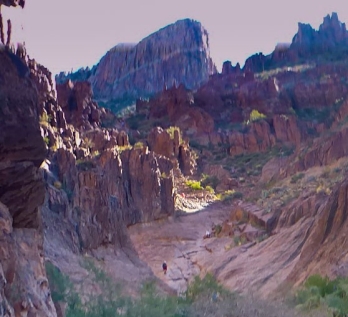 The peak in the top middle is Flat Iron. The hiker in the photo is almost to Siphon Draw.

Flat Iron is only one mile past Siphon Draw but that one mile is unmarked and straight up – seriously. Mitch’s knees gave out soon after Siphon Draw so I was on my own. Kinda. This was the one time I was grateful to have a million of my closest friends on the trail with me because otherwise I would have turned around early-on thinking, this can not be a trail. It was basically a tumble of boulders. I pulled myself over rocks gripping roots or branches – whatever I could find. The advice from the hikers coming down was, if in doubt, stay to the left. Always stay to the left.

I was surprised to find remnants of campfires at the top. We had watched headlamps ascending and descending the trail the previous night so the fact that people had camped on the mountain wasn’t surprising. But a campfire meant that a hiker would have had to carry not only a tent and a sleeping bag but also firewood up that trail. Just when you think you’ve done something special someone else has to come along and make you feel like a weeny.

Also on the peak was a sad memorial to a family who’d died in a plane crash on the side of the mountain. Six people including three kids ages 6, 8, and 9 with their dad on their way to the father’s house for Thanksgiving. So sad. 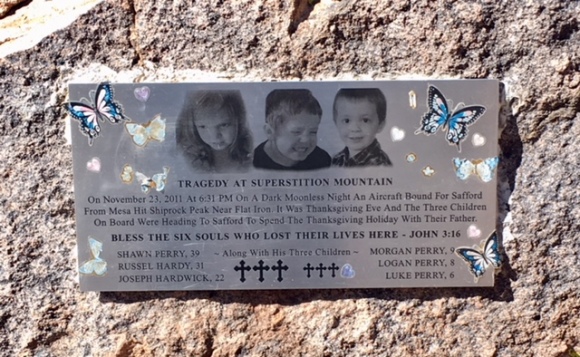 I guess, technically, we did two hikes while we were at Lost Dutchman. We’d passed an old-west-themed saloon/restaurant on the highway on our way into the park the first day. We always like to check out the nearby watering holes. Decamping to drive the Whole Enchilada (our nickname of our truck/camper combo) isn’t a huge hassle, but it is a hassle. So we decided we’d walk to it. But not along the highway – too much traffic and no shoulders. I looked on Google Earth and saw that, from the back of park, you could cut across a field and then walk on some back roads, and cross over the highway to the bar. It looked to be about a mile.

The sun had set by the time we started out. We had enough light to see as we climbed through the barbed-wire fence at the park boundary. But it got dark fast. A trail led us to a dusty road that passed a few scary looking houses. We listened hard for barking dogs – or worse, panting dogs sprinting to chomp down on our calves. We skirted what appeared to be a large horse barn facility with empty RVs around the perimeter. The road went over a hill and then curved to the left. But we needed to go to the right. So, in the darkness we picked our way down and up a ravine, sliding on rocks sometimes, careful not to grab a cactus for support. We crossed the highway and then followed what looked like a horse trail down and up a ditch and over railroad tracks. Did I mention how dark it was?

Finally, we stumbled up the main street of The Goldfield Ghost Town, passing the general store, a gold panning store, a bakery, and a coffee shop (I guess they had Starbucks in the 1800s?) – all dark and empty. We were completely alone on the street. But the lights from the saloon beckoned us onward. As we walked up the wood-plank steps in our clunky hiking boots bundled in our puffy, bright North Face winter coats, a guy wearing a battered 10 gallon hat, calf-length black duster, and well-used cowboy boots leaning against the railing said in a low voice, “Howdy folks.” We paused, and said hi, and then continued in the door where we were met by another man with similar garb and a weathered face. “Where’r you folks from?” he inquired. Tinny piano music plunked from somewhere inside.  A couple other guys in boots, sweaty cowboy hats, and vests moseyed past us. I don’t think I can explain how bizarre this was and how confused I was. I knew where we were, and I knew where we’d come from, and I knew what year it was. But I truly felt like I was in some kind of weird time warp.

Our confusion cleared up quickly. The men, all performers in the “gun fight” that takes place every hour on the hour during the day, don’t come out of character just because the fight is over. We sat at the bar and sipped our beers, watching the old gun fighters mix with the painted ladies from the brothel next door until it was time for us to return to reality – the dusty trail through the cold, dark night. 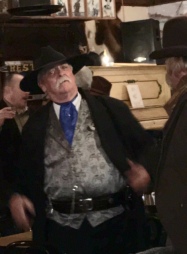 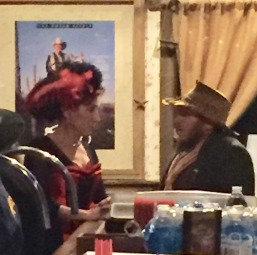 Next blog, our last campground in Phoenix – Cave Creek.

This blog post was out post-dinner entertainment. Jim has that coat the guy is wearing, but in red. You guys are slowly convincing us this is what we need to do someday – but maybe across Canada. Thanks for the fun read!

You’d love it! And Canada has so much to see, I’m sure. Since we can’t get away in the summers you need to do a RVing Canada blog so that we can follow you!

[…] does Cave Creek rank (for you) in the four Phoenix area campground we visited? (McDowell, Usery, Lost Dutchman, Cave […]