Because we’ll be in Delaware the majority of the winter this year, I am determined to do something active outside, if not every day, then every other day. So far it hasn’t been difficult. We’re enjoying the autumn we didn’t have in October/November. But I know the real test is coming – those gray, dreary, damp days where the gusty east wind blowing over the cold ocean jeers at the sight of my precisely layered fleece and nylon and vests and windbreakers. Those are the days when getting outside will be a true accomplishment.

This past Sunday was not one of those days, thankfully. Windy, yes. But with a cheerful blue sky and temperatures in the low 50s, the day felt almost spring-like. I launched at Porter’s Crossing on the Pocomoke River to paddle downstream to Snow Hill. Mitch wanted to do a bike ride in the area so he offered to be my shuttle. I love one-way paddles! 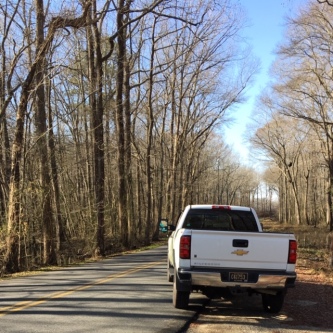 There’s my ride, leaving me. 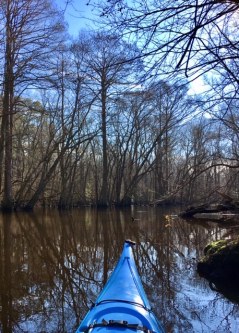 I love it when the sky matches my kayak!

I don’t know if I’ve ever seen the water level that high at the launch. It filled the ditches on either side of the road and spread out over the banks and raced around the hundreds of cypress knees making the Pocomoke sound like the Potomac at Great Falls. The tide and the current and the wind were all heading the same direction as me, so for the first half mile or so, I only paddled to stay out of snags.

If I were a gnome, I’d live in the upper part of the Pocomoke River. No matter the season, it is magical. In the spring, summer, and fall, before the cypress trees drop their leaves, it is like a hidden tunnel. But even in the winter, the slanted sunlight filtered through the bare branches gives the surface a surreal glow. And there is a small stretch, maybe about a mile long, where you don’t hear any loud-mufflered trucks or motorcycles. Only the squeak of bark on bark, a startled duck running into flight, and a paddle breaking the surface to make a slight change of direction.

Once the river widens, it is still pretty, but no longer magical. Around some bends the wind can be fierce. No trespassing and private property signs pop up here and there. Dilapidated killing huts (AKA duck blinds) hover over the water and along the shoreline. (I didn’t even think to check on the Maryland duck season. I’m very thankful I didn’t come around a corner to see a gun pointing at my stocking cap.)

Just when I thought my bladder would explode I paddled past a point of trees and saw the domed roof of the Snow Hill courthouse on the horizon. Soon I was at the Rt. 12 drawbridge realizing that the water was too high for me to go under it. I’m sure they would open for a kayaker, however the sign on the bridge stated that they needed five hours advanced notice. But the Pocomoke River Canoe Company with their very nice floating dock is just before the bridge as well as a small public park with ladders along the bulkhead. 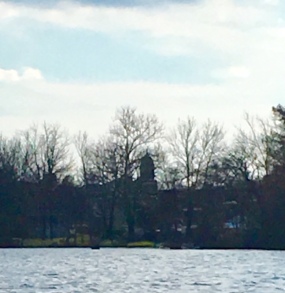 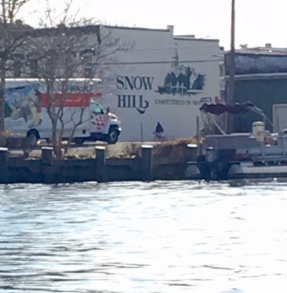 Mitch had left the truck at Sturgis Park, just a couple of blocks from the bridge. Miraculously, he rode over Rt.12 finishing his bike ride the same exact moment I arrived at the bridge. As we loaded up the temperature seemed to drop. Or maybe it was because I’d peeled off my dry suit. The important thing was that the entire time on the water I was completely comfortable (except my bladder). It turns out that January is a lovely time to go for a paddle.

2 replies on “A Pocomoke Winter Paddle”

I, too, try to get outside everyday despite the real winter weather here. If nothing else, I walk a mile at the dog park while Murphie chases and returns a ball. My lungs need the shot of outside fresh air.

You do definitely have real winter up there! How much worse is it than here? I love all the photos of Murphie!