I knew it was going to be a terrible day on the water. It’d been windy, and when I took Brandi out for a run through the streets of Guerrero Negro that morning, there was already a stiff breeze that I knew would continue building. But we’d paid for this whale watching trip way back at the first meeting of the Baja Winters Caravan after listening to many glowing reports about it. We were going no matter what.

We’d arrived at the salt mining town of Guerrero Negro (Black Warrior) the afternoon before and were staying in the Malarrimo RV Park which was basically the parking lot of the Malarrimo Restaurant. Guerrero Negro is a flat, windswept, desolate-looking piece of real estate on the Pacific Coast just south of the Baja Sur state line. Although people started massacring whales in this area in the mid-1800s, the town itself was founded in 1957 by the salt mining company. There are two distinct sections of Guerrero Negro. The western part is where the middle and upper management employees of the plant live. It is a slice of American suburbia – paved, tree-lined streets, identical houses with driveways, garages, and yards, and company cars and trash cans parked by the curbs. The eastern side of town is where the manual laborers live and it was the typical Baja village with dirt, pot-holed streets and houses in various stages of construction with rebar sticking out in odd angles in odd places.

Almost everyone in the caravan was going on the whale-watching trip so we divided ourselves into groups of ten, piled into the vans, and listened to our guide’s informative and entertaining description of the community and the whales on the twenty minute drive out to the Laguna Ojo de Liebre, also known as Scammon’s Lagoon, where we boarded our skiffs. They were open boats with four benches spanning the width. The captain steered the 115 hp Suzuki from the stern. Soon we had pushed off the dock and were skimming along the tiny swath of smooth water in the lee of a huge coastal dune, only inches from the shore – our captain obviously knew what he was doing!

It was beautifully desolate – wind-shaped dunes for miles, sand blowing off their peaks like snow off a mountaintop. Soon though, we could see the white caps in the mouth of the bay. I knew that was going to be our destination. The swells grew and we slowed, finally barely idling as the bow rose and fell and salt-water sprayed over us. I’d dressed in layers culminating with a rain coat and rain pants, so temperature-wise, I was very comfortable. The water hitting us felt warm. But I wasn’t exactly sure how long my stomach would survive.

We drifted and bobbed along, seeing plumes of spray from whales off in the distance. It was beautiful, but the two full hours we were going to be on this boat started to look more like a prison sentence. Then our guide spotted a mother and a calf, not too far away. He motored closer and stopped. Our boat was directly in their path. The whales didn’t alter their course; they kept coming towards us. So very close now, maybe ten feet. Our skiff seemed so small; they seemed so huge. They dove under the boat. We all rushed to the side and looked down into the clear water to watch their bumpy, gray bodies gracefully glide past. They surfaced not too far away and our captain rearranged the boat to be in their path again. 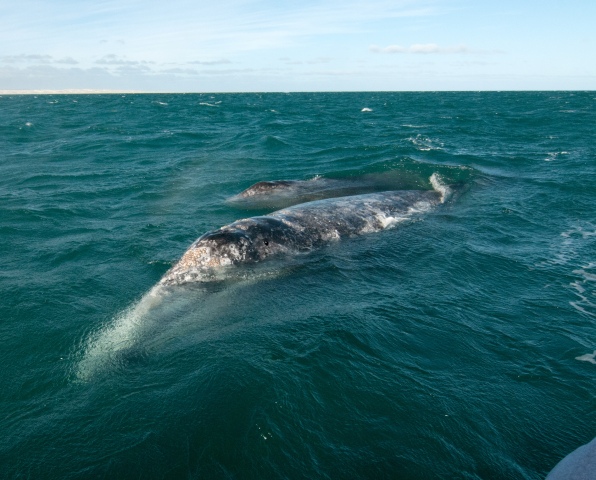 This time they slowed as they got nearer. We looked into the water and could see them headed right for us. I was more than a little scared – these enormous dark masses slowly coming up at us from the depths. Did they know how huge they were? Did they have a memory somewhere in their brains of what atrocities our species had committed against them? About a foot from the boat they surfaced, calmly, stayed there for a few moments, then went under the boat again, coming up only inches from our port. These huge animals seemed to be studying us as we studied them. We all rushed to the side of the boat again. I truly thought we would flip. But we all wanted to see, to get as close as possible. We stuck our hands in the water, trying to make contact. 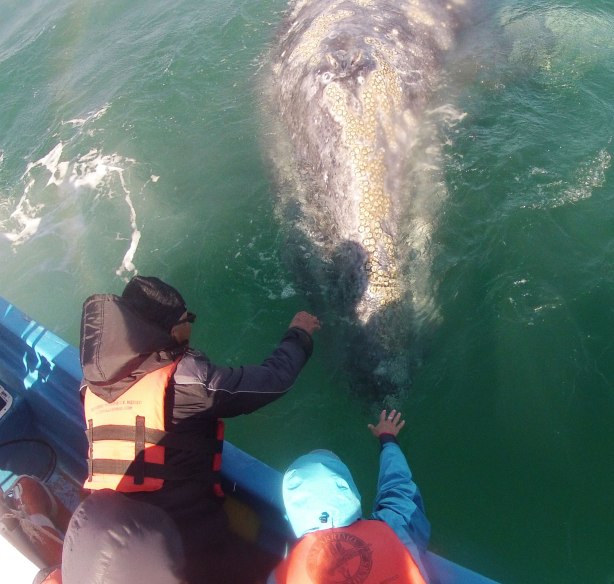 I am from Nebraska. In the chunk of the United States between the Mississippi River and the front range of the Rockies, the further west you go, the less emotional people are. It’s not that we don’t have emotions, we just prefer not to make a big deal about them. We might have life-changing experiences, but if it doesn’t involve a football, we are not going to talk about it.

I’m not saying that seeing that mother and baby was a life-changing experience for me. But, for some reason, as I watched them, so close to each other and so close to us, I cried. I guess I’ve been on the East Coast too long.

We screamed, we clapped, we cheered, we oohed-and-ahhed but eventually the pair moved on. However, that was not the end of the whales. One after another came up to the boat. One whale opened its mouth to show us its strange, curtain-like baleen. A couple others sprayed us with blow-hole water. One kept nudging the boat from underneath. I finally was able to touch one – it was smooth, but bumpy, and felt taut yet spongy. I know – not a very precise description. One of the participants described it as a firm neoprene feel.

By the end we were all tired, crusty with salt water, sun-burned, and, even though Becky had shared her ginger tablets with us, sea-sick…yet thoroughly amazed. To me it felt like two worlds – one old and wise, the other naive and learning – had had a moment. What the whales learned from us silly, goofy humans I can’t imagine. And I think I’m too dense to truly understand their wordless lesson. But I’m pretty sure it had something to do with trust, and forgiveness, and an idea that no matter how much separates us, when both worlds are willing to reach out, there is an opportunity for something extraordinary.